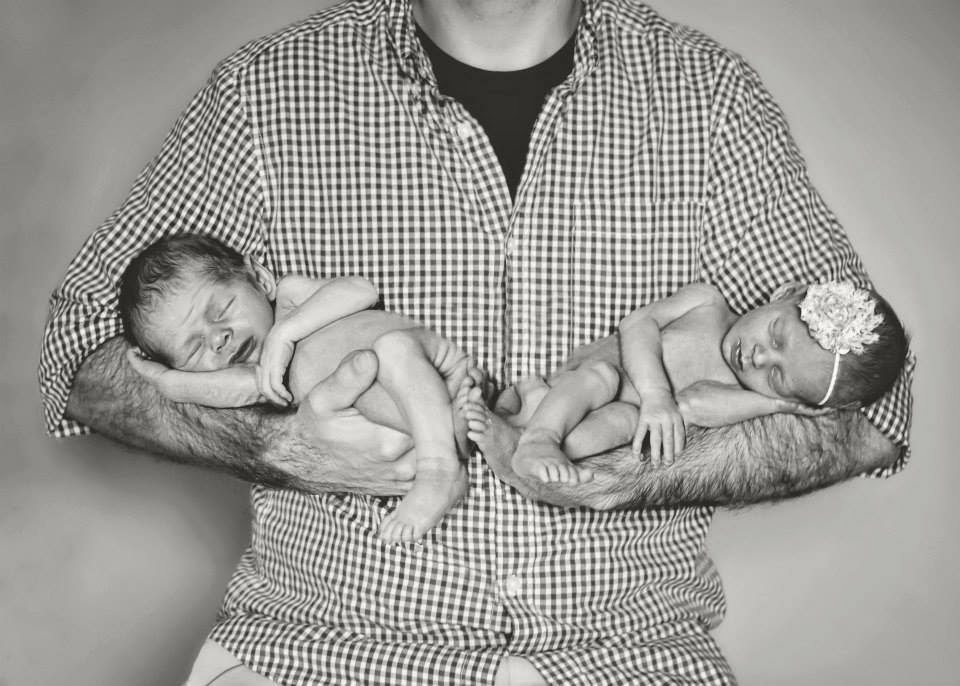 It has almost been 6 months since my last post!  I have been hoping to get back to this blog for a long time.  It is really easy to write in the first months of twin life.  Your twins just stay right where you put them and sleep hours through the day.  Now my kids crawl everywhere, walk across the furniture, and want play with everything you touch!  Somehow everything seems to be getting busier and easier at the same time.

This post will be easy because it is a podcast.  I was interviewed by the Dad's Guide to Twins to discuss the first 10 months of twin life.  (click here to listen) It is 35 minutes long, you might need some coffee.

A couple updated pictures of our twins: 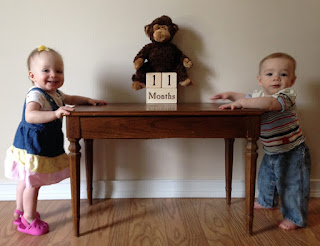 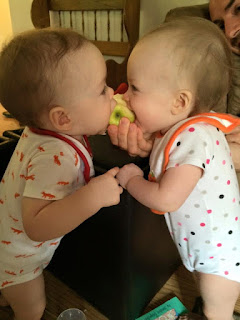 The Paranoia of Losing a Child

As I sit here, the clock is counting down, there is less than an hour left of 2014.  By the time I finish, and most certainly by the time you are reading this, we will have welcomed in the new year! I find myself in a far different place than my typical New Year’s Eve celebration.  I am no longer surrounded by friends or family, no parties, no confetti.  I am alone, on the couch, with a computer and a TV.  Carson Daily has taken a break from his countdown on NBC for the 11 o’clock news.  My wife went to bed an hour and a half ago, and I have a (almost) 6 month old son and daughter sleeping in their cribs.  It might not sound like it to you, but life seriously couldn’t be better!  2014 has been one of the most magical years of my life.  Watching and caring for my two children with my wife for the past 6 months have redefined and reshaped my life entirely.  I have none other than God to thank for these amazing blessings.

Our twins were born in July, which is smack dab right in the middle of our summer break. So we were very fortunate to both have the next several weeks off of work until school started back up in August. I remained on maternity leave as the school year started up, and I am still on leave, scheduled to return to work in just a couple of short weeks. But Devin went back to work at the start of the school year. At that point, the twins were around five weeks old. How lucky was I to have had Devin around full time for a full five weeks?! You might think that by then I was totally cool with being on my own with the babies, basically a pro. I mean, by five weeks old they should practically be taking care of themselves…haha. This image illustrates how I was feeling the first day I was on my own with the twins: 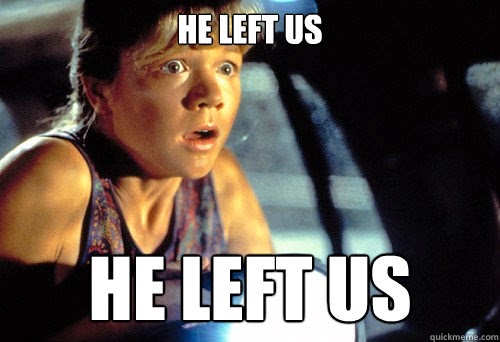 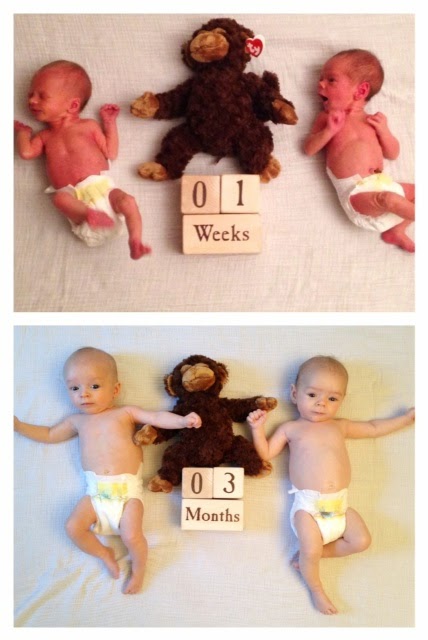 We have been parents for 3 months, and I already forget what it is like to have my own schedule.  We eat, sleep, and go to the bathroom on their time!  Social life, gone!  I must apologize to all our friends with whom we have lost touch. It is extremely difficult to get out with newborn twins, but feel free to visit us!  Just make sure it is within the short 2 hour time slots between feedings. 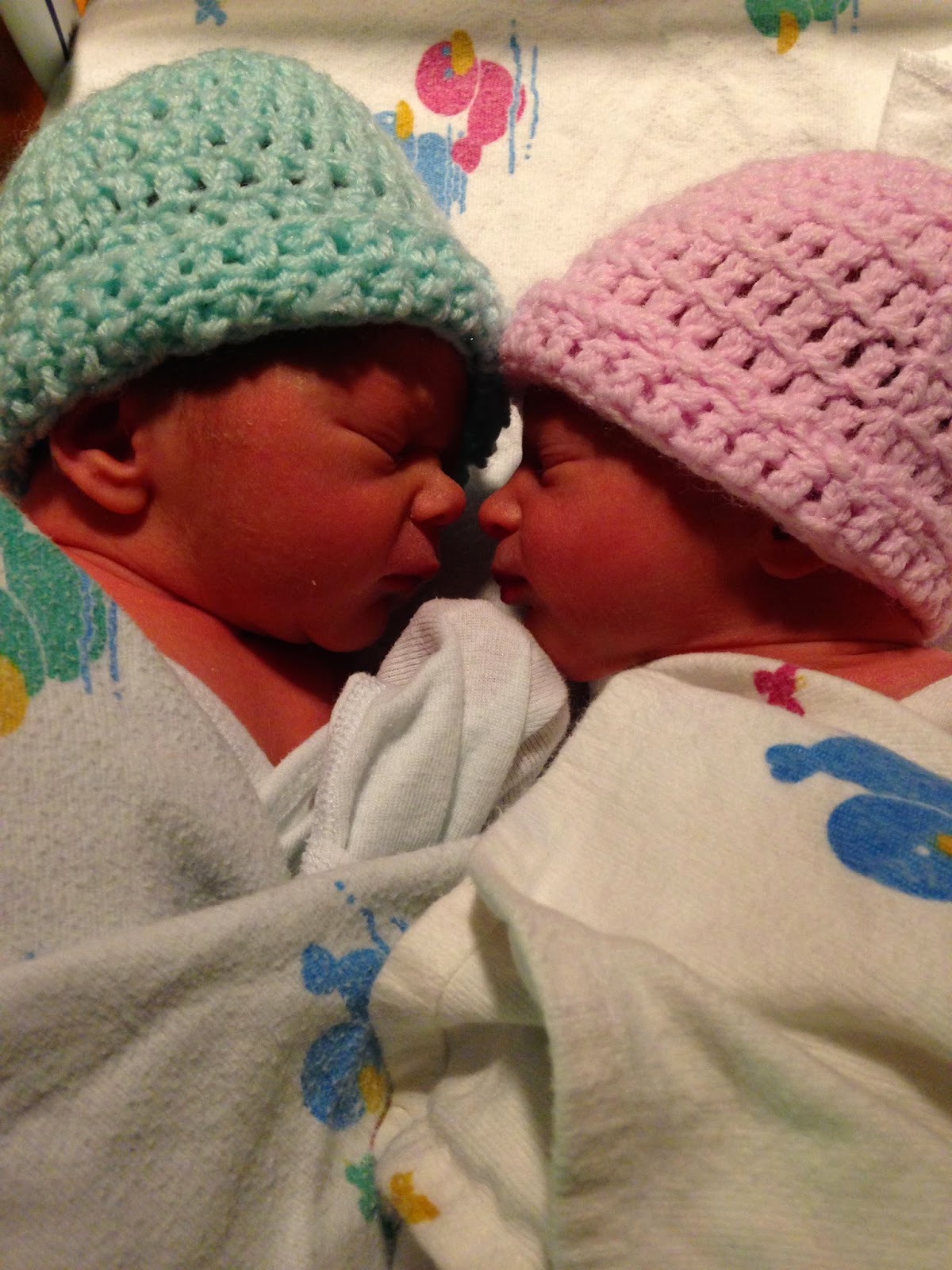 If you didn’t catch my previous blog about our scary experience with labor, you will want to check that out (here) before you read this one.

It was the early hours of July 7, 2014.  The nurses called me into the operating room.  Amy and I had always hoped to have our baby (babies in this case) delivered naturally, and by naturally I mean without surgery.  As we got closer to the delivery date and both babies remained breeched, that wasn’t going to be an option for us.  A breeched baby is in the womb head up, but the head needs to be down for the safest delivery.  Rather than entering a delivery room, I was joining Amy in an operating room for a c-section.  We were nervous about the idea of a c-section at first, but through conversations with those who had experienced it, we felt comfortable.  We knew it was the safest option for our babies in this particular situation. 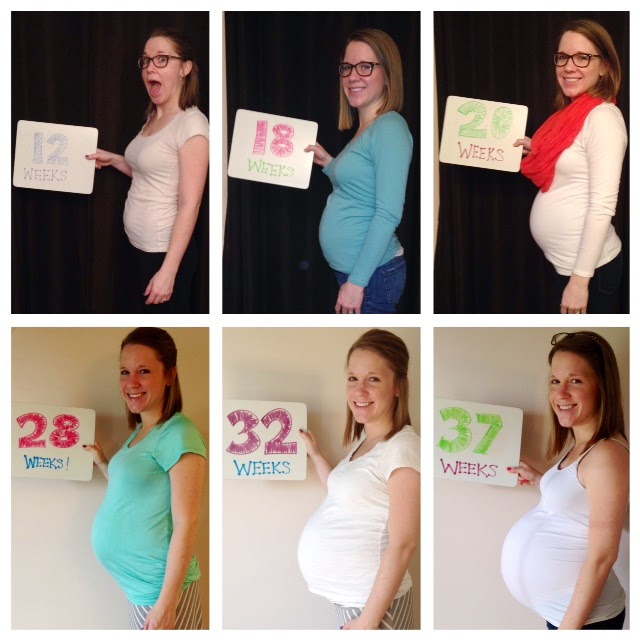 I’ve only been non-pregnant for three months and I’m already losing touch with what it was like. So, I’m going to attempt to jot a few things down to commemorate my pregnant-with-twins experience.

Being pregnant with twins is much like being pregnant with a singleton….you know, in terms of growing a person, only I had two. From the very beginning of my pregnancy, I had a strange feeling that there was something different going on. I don’t know how to explain it other than it just felt like there was a lot of activity going on in my uterus. At my first OB appointment after a positive home pregnancy test, my midwife was pressing on my abdomen and said “Oh yea, there’s definitely something growing in there”. This comment only made me worry more (yes, I admit that I was terrified of the thought) that I might be pregnant with more than one baby. A day or so before my first ultrasound, I told Devin that I had a bad feeling, which I corrected with “unsettling” feeling, that there was more than one baby growing in there. Don’t worry; it wasn’t all doom and gloom when the duo was confirmed. We were so excited. Terrified, yes, but underneath a lot of joy and anticipation.

The moment I walked into the bedroom, I knew the twins were gone.  I tried my best to hold my composure, as if everything was alright, but I believed deep down that we lost our twins.  All I could do was pray that I was wrong, that somehow Amy could bleed so much, and everything would still turn out fine.

Blood was all over Amy, the sheets, the floor, and anything Amy touched.  The bedroom looked like a murder scene.  Normally, blood would make me sick, but this was a high pressured situation and I was in go mode.  I gave Amy the towels and made sure she physically felt ok.  Then my focus turned to getting to the hospital.

My name is Devin. I teach 2nd grade and live in Dublin, Ohio. My wife Amy and I welcomed two beautiful children into the world on July 7, 2014. Donovan and Hazel have blessed our lives ever since!
Contact us: doubledoodiedad@gmail.com

Welcome to my blog, my very first blog. I am just getting started. Check back weekly for new posts about the twin-life!